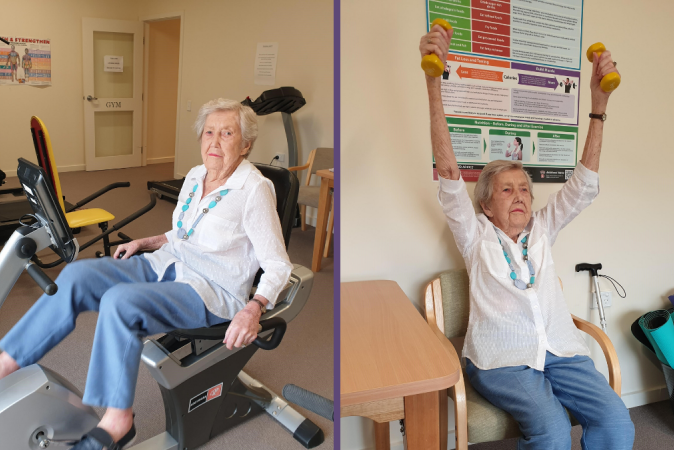 Thyra Sullings, formerly Greenwood, is the sixth child born into a family of fourteen. She was born in 1925 and will soon be 95 years of age. Thyra grew up on a dairy and wheat farm just outside Quirindi and reflected about the fun she had living life on the land with a large family.

At the age of 19, during the end of the war, she enrolled in the army for two years and joined the AAMWS (Australian Army Medical Women’s Service). This work required her to relocate to Sydney where her role was attached to the old Concord hospital.

In the few days after returning to Quirindi from Sydney, Thyra met Bob Sullings. Both Thyra and Bob had lived in Quirindi all their lives but had never met each other until after the war. Bob was enlisted in the Army for four years and spent three of these overseas in New Guinea. After they were married, Thyra and Bob, built and ran a garage in Quirindi which was called Sulling’s Garage and Service Station and they operated it for over forty years until they decided to retire.

Thyra’s eyesight was slowly declining and so they decided to move to Tamworth and live in a gated retirement community called Tamworth Gardens in April 2018. After living together in Tamworth for almost one year Bob sadly passed away.

Despite Thyra’s poor eyesight she is as active as ever!

HOW TO LIVE AN ACTIVE AND HEALTHY LIFE

Thyra believes that her good health can be attributed to always leading an active and healthy lifestyle. Living in the country meant that she had plenty of fresh air and good food. Her family did not have much money and due to the distance, they lived from town they did not eat much junk food or takeaway. Even when they made a trip into town, they would be lucky to get an ice cream. To entertain themselves, Thyra and her thirteen siblings played lots of games and sports around their house. They did not have fancy equipment and would often have to be resourceful when playing various sports.

In her adult years, Thyra kept active and healthy by walking with her sister every afternoon. Seven days a week at 4 pm the two sisters would meet up and walk a few kms for up to half an hour. Thyra said that it was part of her daily routine and the only time they would miss out is if there was a special event on. Thyra also loved dancing with Bob. Most weekends they would be off at a dance and in winter they would attend balls every two-three weeks. When the debutante balls came around Thyra was often involved in many hours of training the young people how to dance.

Thyra expressed her love for volunteer work to keep active in her community. She was involved in many groups around Quirindi. She assisted with the food preparation for Meals on wheels and often volunteered out at the Heritage Village where she would help in the café serving food and drinks or be out around the grounds doing whatever jobs were in need of doing. Whilst working at the Service Station she was also kept active as there were many more physical jobs involved in the day to day operations compared to these days. She stated that caring for her two children, cooking, cleaning, and gardening always kept her busy and on her feet.

Thyra only started performing gym-based exercises at the age of 92 when she moved to Tamworth Gardens.

Every morning after having breakfast and cleaning up, Thyra schedules in time to perform the exercises she has been given to do at home. These exercises consist of stand ups from a chair with a band around her knees, lying on her bed doing bridges by lifting her hips, standing at her kitchen sink for safety, and performing side stepping, calf raises and heel to toe walking balances. She completes one round of ten repetitions for each exercise and never misses a day of her exercises.

Later in the day either before or after morning tea she heads into the gym to walk on the treadmill for ten minutes. Thyra would love to continue walking outside but due to her lack of vision she is unable to do this without support. Despite this, she keeps active and rarely misses a day of walking. If she is feeling some pain in her knees she might walk at a slower pace or for a shorter duration on the treadmill but always aims to do it every day.

Thyra described her daily exercises as an activity that she is happy to do to keep herself active. She does not feel that she has to force herself to do it and on days where she may not be feeling 100% she remembers the feeling of achievement she gets after finishing her exercises and this motivates her to get them done. Thyra can notice the benefits that regular exercises has on how she feels and knows that it has a positive impact on her health.

THYRA’S ADVICE TO OTHERS

Thyra’s advice to anyone who is considering starting exercises or who has been recommended by their GP or health professional to start exercising is to start slowly. She believes that once you build a routine you will see the benefits that exercises have and will help you to look after yourself as you age.

Thyra described how it makes her feel to be less reliant on others and to maintain her independence for daily at home tasks such as putting on her shoes. It frightened her to think that perhaps her body and joints would cease up and not function as well if she stopped her exercises, so at that point she stated she did not want to risk it and find out.

Thyra also highlighted the sense of achievement that you feel when you are doing your exercises and knows that this feeling can help you stayed focussed and motivated.

Listening to your body to modify exercises was another important tip to remember.

What does feeding the dog have to do with lower back pain?
August 14, 2022

Knee pain – Could it be Patellofemoral Pain Syndrome?
June 26, 2022

Exercises to help strengthen a painful shoulder
May 8, 2022

Exercises to avoid injury
April 24, 2022
Recent posts
From the gallery
Go to Top